EMMA – Espoo Museum of Modern Art takes part in the Helsinki Festival by presenting its’ new collection acquisition Off Seasons. The work is on display on the museum forecourt in the sculpture park in front of the WeeGee Exhibition Centre, where it forms a dialogue with the sounds and elements of its environment and is free for all to see.

Off Season consists of music, structures and plants, forming one unified artwork. The result is an intense, multisensory and immersive experience where viewers can spend time and enjoy the environment. Off Seasons is a sound installation based on the collaboration between the visual artist Hans Rosenström and the Danish artist duo Stormglas (Andreas Borregaard and Mikkel Sørensen. 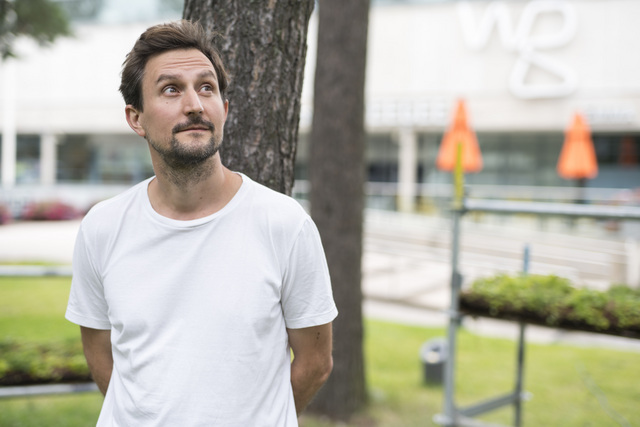 The work gives the audience an opportunity to listen to the interpretation of the theme of four seasons by four contemporary Nordic composers. The music is composed by Rasmus Zwicki, Fredrik Österling, Sunleif Rasmussen and Martin Rane Bauck. The composers, selected by Stormglas, chose their preferred season, which formed the basis for their composition. Stormglas’ only rule was that the music had to be composed for a quintet. Hans Rosenström edited a soundtrack from the compositions for the work Off Seasons.

“The four seasons are such a familiar theme in classical music, with Vivaldi’s composition of course being the best-known of treatments of it. I combined the seasons into one work, with the intention perhaps to comment on how these days we try to live oblivious to seasons, as if they made no difference,” says Hans Rosenström.

The music was composed for five different instruments, namely electric guitar, accordion, violin, piano and double bass. These, in addition to the sound of breathing, can all be heard through the various speakers. The soundtrack lasts about 30 minutes, and plays on a loop. The work was originally created on commission by the Chart Art Fair in Denmark, and was shown as part of the art fair’s programme in autumn 2016. There it was presented in the courtyard of Copenhagen’s Kunsthal Charlottenborg.

Sound has a special role in Hans Rosenström’s art. He has created sound installations for public spaces and exhibitions throughout the world. The permanent public work of art in the ferry terminal in Stockholm’s Gärdet offers a glimpse into the future. His work that recently featured at the recent ARoS Aarhus Kunstmuseum Triennial was based on the image of ruins in one of Caspar David Friedrich’s paintings. In Off Seasons, Rosenström returns to the same themes: the mutually opposing concepts of building and ruin, and their presence in our lives and environment.

Off Seasons has recently been acquired for EMMA’s collection and can be set up both indoors and outdoors, changing the location and adjusting the work accordingly. EMMA aims to renew the use of museum collections with modifiable, temporary works and renewable conceptual works in order to regenerate public art, and in this way to take art beyond the confines of museum walls.