Keira Knightley and Ralph Fiennes are a luxury couple of starring actors in this drama set in the 18th Century around the figure of the duchess of Devonshire, Georgina. 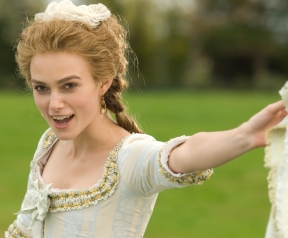 I found the film quite enjoyable. The environment, the dinners, the casino nights, the affairs of the royalty, the popular change in the politics and in the streets… everything is very well pictured by director Saul Dibb. Knightley  does her part more than decently, although the sweetness of her face and figure seem to shape them always on roles where she has to wear a corseted dress,  but for me the best of the movie is Ralph Fiennes, an actor that seems to give always his best when playing roles of “bad guy”, same than years ago in The Schindler List. Here, once again you have no choice but hating him due to his calculative coldness and royal manners, apart from his lack of scruples and notorious infidelity. All in all, a perfect portray of what a nobleman should have been in England at that time.

There are also some sensual moments like the wedding night between both main characters (more than one will repeat the scene again and again to see Keira partially naked) or with the “bed games” between her and Hayley Hatwell. But at the end of the movie, the tension decreases. It is like if after the climax when she rejects to come back home, the script writers lacked of ideas and aborted what could have been a great movie. Not bad anyhow, and worthy to watch if you want to enjoy exquisite acting and good sets.

The best: Ralph Fiennes as the Duke.

The worst: The end of the movie seems to happen in haste. The detail: Keira is a little bit less shy than in Pirates of Caribbean, appearing partially naked during her wedding night scene with Fiennes.