After a couple of years of awaiting, here you have the new album from the Kings of Finnish Iskelmä.

Simo Silmu and his fellows from Yölintu are some of the biggest representatives of Iskelmä sound nowadays in Finland. 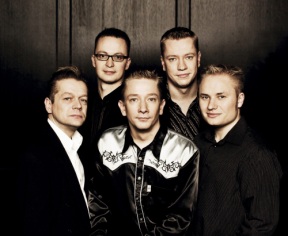 For those of you who have lived in Finland, probably Iskelmä is not unfamiliar (even if you do not want to, you will listen to it in some radio station while taking a ride in a public bus). For those of you who do not know it, we could resume it as a kind of melancholic pop, but also very danceable.

Although Iskelmä is not my favorite genre, and it is probably more aimed at an audience of over 30 years old, the songs are actually quite catchy. Tracks like the first single Anteeksi, Pimeästä Valoon or Ihana Sinä can be part of the perfect soundtrack for the next Juhannus, while enjoying the company of friends in a cottage having beer, sausages and sauna.

Quite a good work, if you think about it inside the Iskelmä genre. For those of you who want to come closer to the Finnish spirit, and discover an important side of its musical scene, this is worthy a try!