Interview with Zachary Hietala from Tarot

Tarot was originally formed by the Hietala brothers in the early 1980’s. Their first single Wings of Darkness saw light in 1986 and during that same year they released first full length album titled Spell Of Iron. Tarot has been active for over 20 years and now they released their eighth studio album called Gravity Of Light. The band describes their new album on their web page as the following: “The album feels like meeting an old friend. Some things are the same but your friend has gained weight. He shows new scars and tattoos. The beard is longer and he projects a meaner and faster temper. At the same time there’s still a big heart at the center. When you heard Gravity Of Light you will believe.”

And I was so lucky to get an interview from Zachary Hietala – founder, guitarist and music writer from Tarot.

Your eighth studio album titled “Gravity of Light” is due out on April 23 in Europe. How is the new album different from your other albums?

In my opinion, it’s combination of FGON (For The Glory Of Nothing), SOP (Suffer Our Pleasures) and CFB (Crows Fly Black) albums. It has progressive edge, put down heaviness and super melody. The best this far. 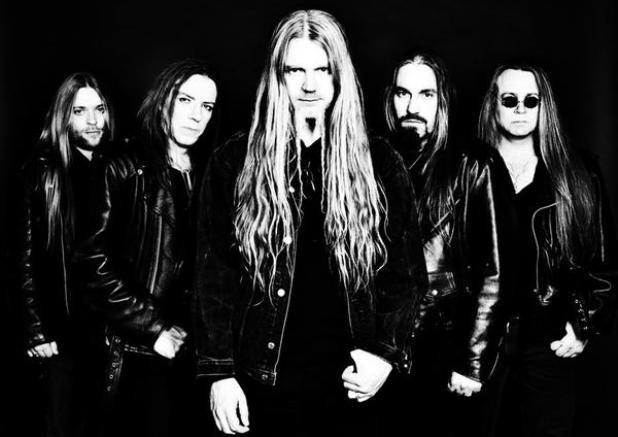 In Finland it was already released on 10th of March. How has the acceptance been? What have been the reactions so far?

We took second place on the official Finnish top 40 charts… So there’s something to go for the next album… he he! Reactions from the fans have been quite fine, so hardly can wait to play the new songs live on stage.

Was it a hard album to make or did it come quite easily?

This album was the easiest album ever made. We got demos and everything together so easily, compared to few latest albums somehow. We just put up my, Janne’s and Marco’s ideas together, and everything was there. We let the Pecu and Tommi train with the demo tracks and then went to studio to record the album. It went without problems, just few times our Macs crashed, but that’s normal shit with computers.

On March 31st starts the “Gravity Of Light” tour. What are your expectations regarding this tour? Will you be touring outside of Finland also?

Sold out gigs of course… he he! First we do three weeks touring here in Finland and then we are doing some gigs in Russia, Japan, USA and Mexico. More South American gigs as well as European gigs are on their way, but cannot tell more this far, sorry.

I understand that you, Marco and Janne are doing bits and pieces of your own and then you introduce the parts to each other and put things together musically. But who of you writes the lyrics? Is it also a “group-effort” or is it clear from the starting point that for example you or Janne writes the lyrics?

Marco does all the lyrics, surely I read them all, but he knows the stories what to tell and what makes a good story for the songs, so I don’t need to change his ideas at all lyrics wise.

Who did the artwork for this album?

Toxic Angel is his artist name, Janne Pitkänen has done all the cover work for us since Suffer album. Surely he is a great artist indeed.

Where did the main inspiration for the songs come from? From your own lives, society in general, history, literature or something else?

We just let it flow… For me, I don’t need specific mood or don’t try to find something, I just play and when something useful is coming out from the fingers, I put it on the hard disk. Later me, Janne and Marco will put the ideas together, the old story…

Can we expect a video to a song from the new album? Maybe for I Walk Forever?

Surely… Tommi and Marco did the video of I Walk Forever in Cairo Egypt, they shot some camel riding, singing by the pyramids, wandering in the desert and so… I’ve seen some splits of the video and it was terrific and great, hopefully it will come out soon.

I know that Tarot is performing at Tuska Open Air (annual open air festival in Finland, Helsinki) which is very awesome but what are other plans for the summer? Where else could one see Tarot live?

You will find us from almost every worth mentioning festival here in Finland. We are playing on more than 10 big festivals, to mention just a few like Sauna Open Air, Tuska Open Air, Ruisrock, Nummirock, Ilosaarirock and so on.

Will you do another live DVD like “Undead Indeed”?

This soon, why should we? It just came out last summer; I think we should do some studio records more before the third live album.

Tarot has already done eighth studio albums. What is your favorite out of these? Which one was the easiest/the hardest to make?

Always the newest one is the best, before you get some time between the release date and then you can listen to it objectively. If we don’t count the GOL (Gravity of Light) album here, in my opinion “To Live Forever” is the best because Janne was there in the first time and it changed our style to the way we are still on.

GOL album was the easiest to do for me of all Tarot albums somehow. I got the riffs, bridges, solos and so together easily. Hardest was surely Stigmata,we got so many problems and shit, this interview has not enough space to put all out… he he!

If I mention a few shitty situations – When I needed to start my guitar parts, I was so drunk at the party that I went through a glass door. So my right hand was cut badly and I couldn’t play in several months. Right after my hand was ok, the mixing desk broke out and the repairing of the mixing desk took a couple of weeks. When it was repaired, Marco got some serious lunge problems, like tuberculosis and almost half of liter water in his lungs, so he couldn’t sing in the next year and a half. And this was just a start… It took almost year and a half to do the album and when you listen that album, you can hear the pain behind the songs in the atmosphere.

What is your favorite Tarot song to play live?

2009 Undead Indeed winter tour had so many brilliant events, so cannot say which one was the best, but there it was. As a fan, there are so many, but Michael Jackson’s 1995 Dangerous tour at the Gröna Lund stadium and Rammstein in Provinssirock 2005 are on the highest places in my book.

Your brother Marco is playing in Nightwish and sometimes it takes up most of his time. Does it bother you that sometimes you can’t play shows or rehearse new songs because of Nightwish?

Not exactly. I can perform the songs, as much as I need, without Marco and me, Tommi and Janne have our hands full of different projects as well. Me and Janne are doing Marenne and I do producer work fo rnewcomers, Janne is playing with Turmion Kätilöt and Eternal Tears Of Sorrow,Tommi does vocals for the different groups and I do have a day job, so enough work indeed.

On Tarot official web page you have listed a band called Marenne as a side-project. How are things with Marenne? Are you still active?

Hopefully yes…Now I’m so busy with Tarot and of course Marenne is doing new songs, so when I get my summer vacation, I do Tarot gigs only at the weekends and then have free time during the week to put down the new ideas for her and for the future. If everything goes as planned, we can demo the album this year and release it next year, but that’s just the plan yet.

On a personal level I read that you’re a youth instructor and music teacher. How did you become involved with youth work and teaching?

I did my 12 month civil service, instead of the army, back in the early eighties in the rehab sanitarium. That made me to get educated on this kind of profession and I’ve been in this field of work more than 20 years now. Mostly I work with teenagers between the ages 12 to 18, who have problems with controlling their lives by different reasons. Music wise, I learned musical theory by myself and I’ve been a teacher for the 8th and 9th grade students of comprehensive school, as well as given personal guitar lessons to advanced young players for years. 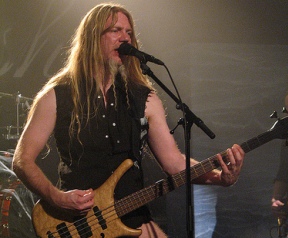 A lot of bands that have been active for many years are releasing their biographical books. What do you think about it? Can we maybe expect a Tarot biography in future years?

Big noo… hehe! Surely I like to read them, but never ever would want to read my life between the sleeves. My mother and father still live and I don’t want to humiliate them. Wild wild eighties….

I must also say that I totally liked you song Antz on the Guitar Heroes album. Will there be a Guitar Heroes 2? Would you be willing to participate in such a project again?

That was very interesting project and if there’s the place and need for the second album, I will be ready for it, if the producer people ask me. “Antz” was made in the way of the eighties guitar solo albums and ‘cause I knew all the guitarists of project, I wanted to something different, to get noticed. I didn’t do as many notes as they did, but I surely had melody parts and enough fast playing to get my speech done memorable and stand out from the other players.

Which band do you think is the “father or mother” of heavy metal musicin general?

There is a new documentary The Promised Land Of Heavy Metal. It’s exploring why Finland has become the country of heavy metal. What do you think is the reason that heavy metal is so big in Finland?

Long cold winter, you must be aggressive by that, heh!

Are you glad that heavy metal has reached a wider audience or would you prefer it still to be more “underground”?

I prefer wider audience, you can make the living by it. If I’m correct, what is the point to do music, if there’s no audience or buying crowd? None.

Since I’m from Estonia I can’t help but to ask – do you know any Estonian metal bands? Maybe Metsatöll?

Yep, I know their music, but don’t know the guys personally; maybe we meet at the festivals and have a good party?

How would you describe Tarot to someone that maybe doesn’t know anything about you or has just discovered your band?

Any last words to the fans all over the world?

Hell knows, Satan is dead, rise all the Tarot fans!
Yours Zachary/Tarot

Find out more about Tarot:

One Response to “Interview with Zachary Hietala from Tarot”